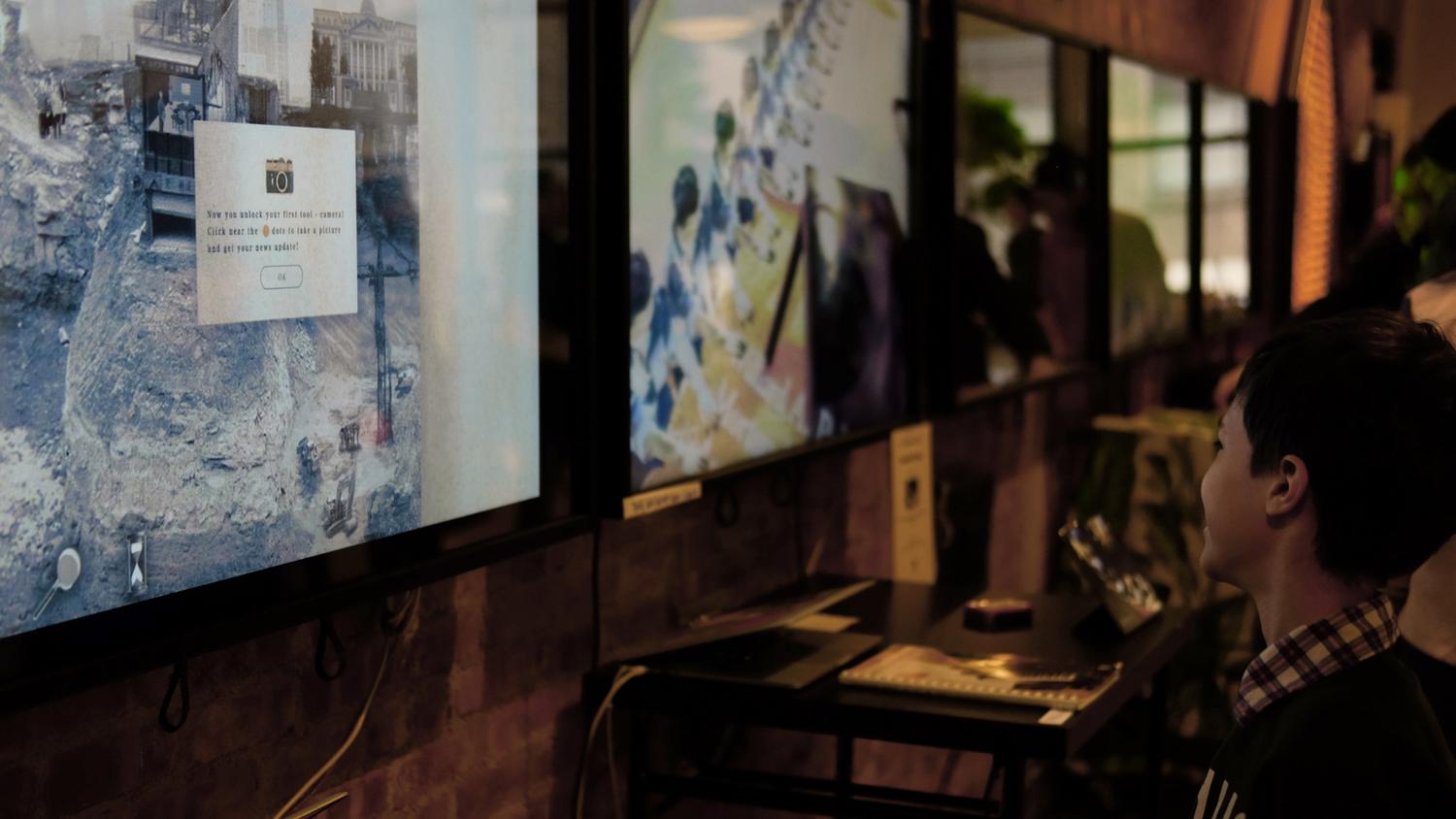 Scope
User Research,
Web Development
Tools
Javascript, Photoshop
Time
November - December 2018
Nowadays, news are always misunderstood and forgotten by people. And cyberbullying always occurs even though people actually don't know the whole truth. Teenagers play a lot of games but are not critical enough to understand news. Can we design a game that help people look at different perspectives of the truth?
The Reporteris a website where players can explore news from different perspectives and unlock different tools to go deeper into the news. 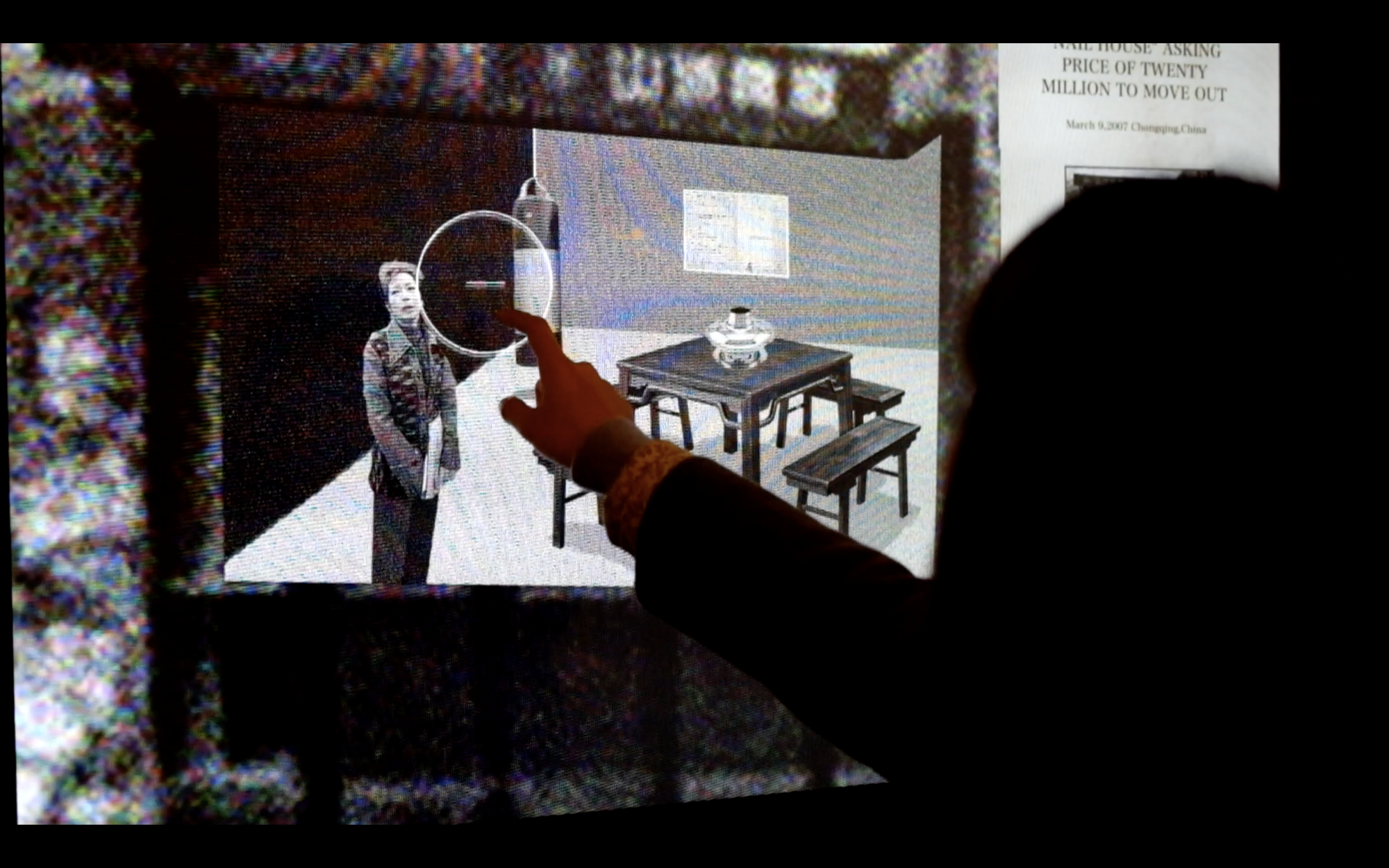 Research and Experience Principles
In my undergraduate paper, I explored the social interaction in games as taking PLAYERUNKNOWN’S BATTLEGROUNDS mobile as an example. Based on interviews on 20 players, one of the key findings is that people tend to play the game with their friends and discuss the props they meet together. However, in the real world, there are many news highly related to the society issues are not discussed by teenagers. What if the props of the game can be replaced by some daily news with game rules designed to ignite teenagers talk about the news and think about the society? This is the main idea of my project — Provide a field for news discussions in the form of games.

Key findings related to the project:
- Players tend to play the game with their friends and discuss the props they meet together
- Vivid personality, music, the function of memory and sharing contribute to the social interaction in the game
- Players are looking forward to the social interactions that is equal, polite, immersive and collective
- Giving players the ability that they don’t have in reality will help increase their willingness to play the game

Experience principles for this news games can be concluded as immersive, novel, connected and objective.

- Immersive: Users can experience the news and the emotions behind through visual, sound and details of the story
- Novel: Users have the power they do not have before
- Connected: Users can play or share the game with their friends
- Objective: Users can feel that they are equal when receiving information
Game Mechanism User Test
The first version of the idea was used for paper-made user test. The game has four levels and each of them refers to a good principle towards news - make sure the news is true, be objective to news, listen to different ideas and keep tracking the news. Users are asked to solve the puzzle based on hints given to them.

However, there were some confusions to the users. We therefore changed part of our plan based on these confusions. 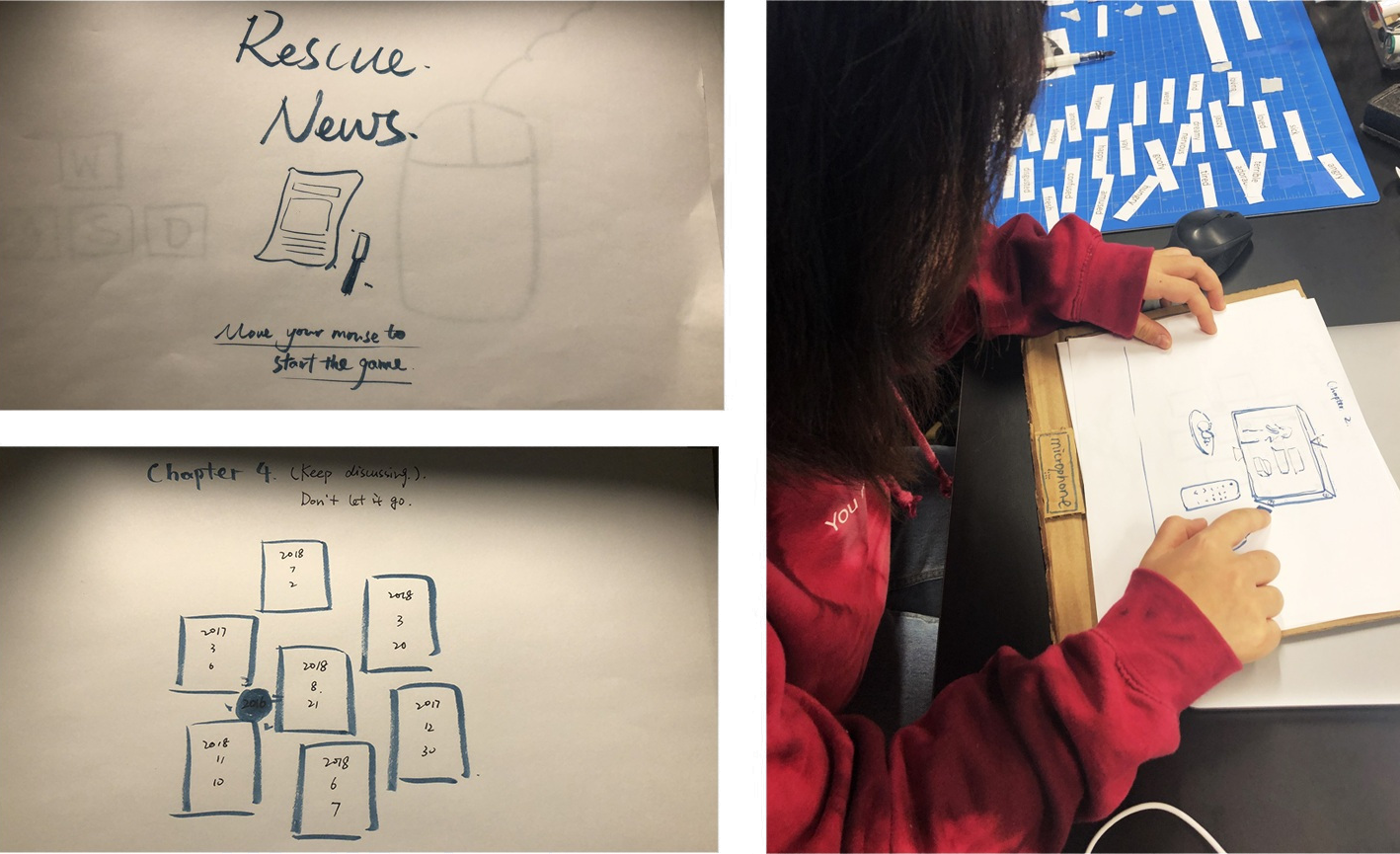 Design of Content
We chose the Chongqing Yangjiaping Demolition Event taking place in 2007, Chongqing, China as an example as the news itself was very dramatic. We don’t want to blame the government for clearing the area but want people to see more dimensions and go deeper into a news before giving their comment. We studied the reports on the month this news occurred and found that the attitude of press did change a lot when more news were being reported. So we divided the news into three parts: 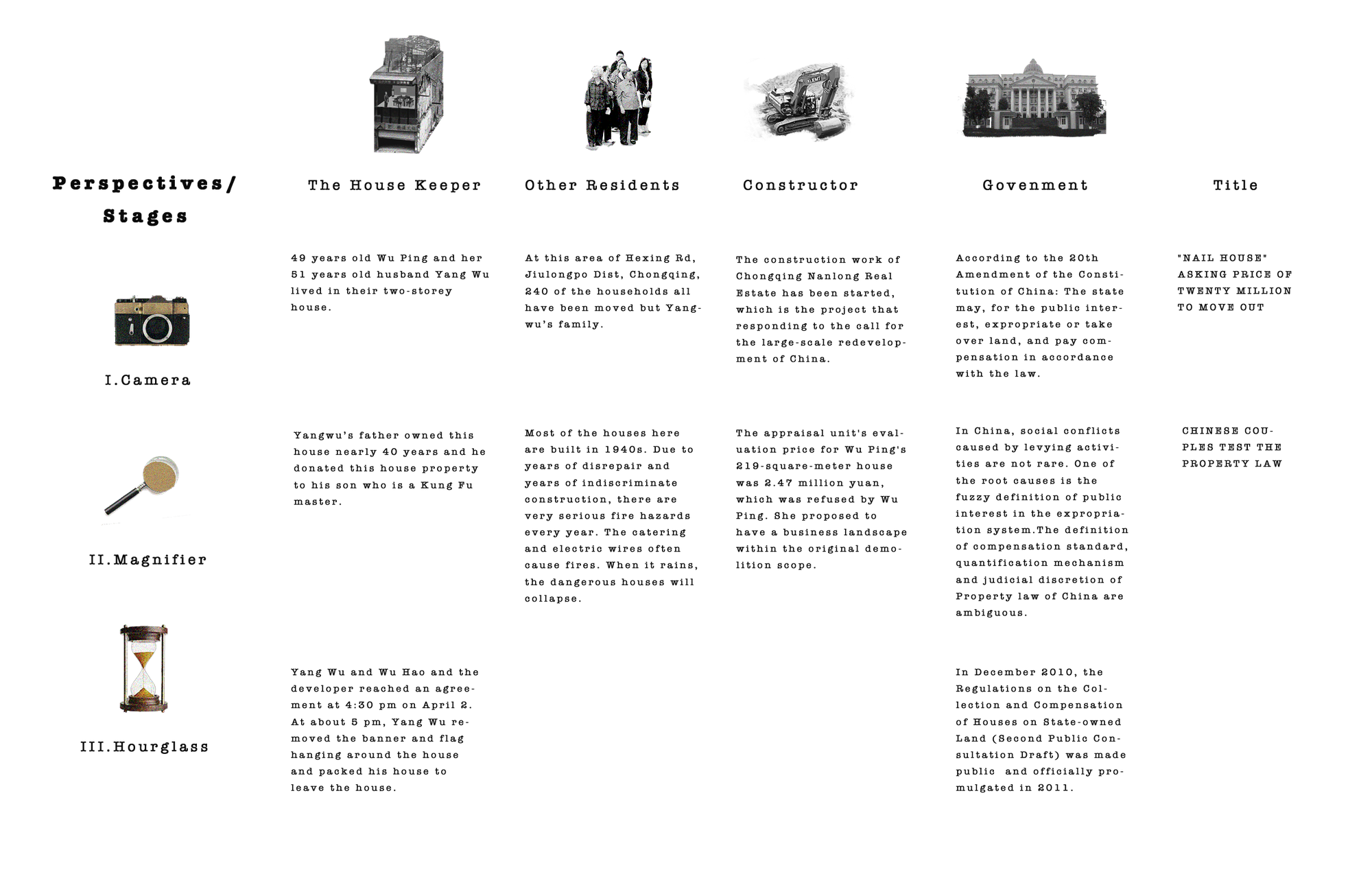 Then I design the visual components we need for the web. We also prepared background sound for the scenario. 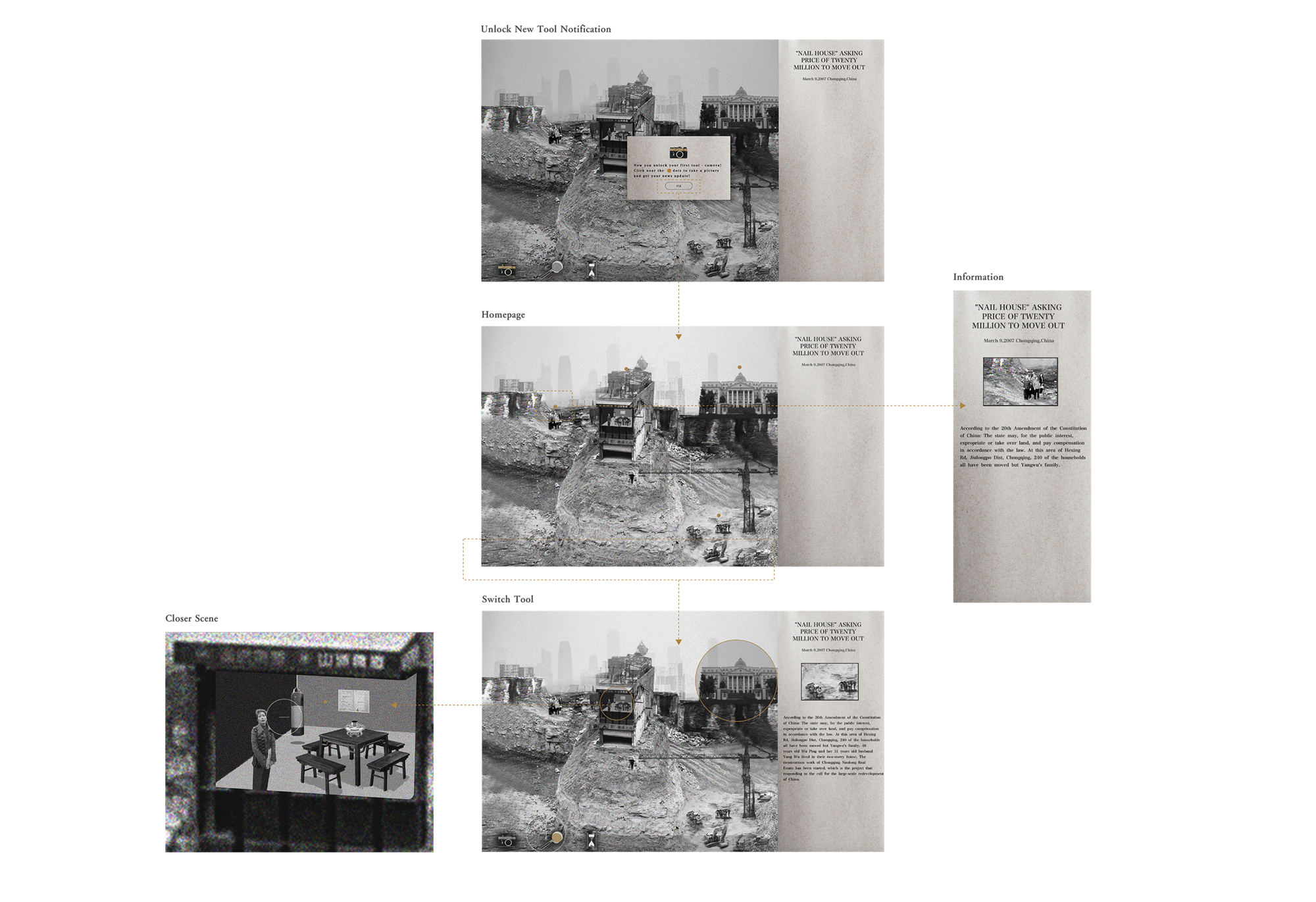